Our Day Out: A Story of Queer Resistance and Leadership in Durham

Story+ 2022 | Our Day Out: A Story of Queer Resistance and Leadership in Durham

On April 12, 1981, four men sunbathing along the Little River in north Durham were assaulted by a group of men and women in what was quickly understood to be an anti-LGTBQ+ hate crime. One of the men—Ronald “Sonny” Antonevich—later died from the injuries he sustained that afternoon, leading to the arrest, prosecution, and conviction of the two men who killed him. In the weeks and months that followed, the Little River assault and subsequent trial inspired LGBTQ+ organizers in Durham to launch the Our Day Out protest, which was the most visible public demonstration for queer liberation in Durham to that point. The Our Day Out organizers advocated not just queer liberation, but also intersectional solidarity in resistance to anti-Black violence; resistance to state oppression in all forms, including the carceral state that imprisoned Antonevich’s killers; and a critique of US society in the late 1970s and early 1980s as beset by a resurgent tide of white supremacist violence.

Many stories about that day were told, each framed for a specific audience: a jury of Durham residents, a news-reading public in a conservative state and country that still criminalized homosexuality, and a queer community living under the daily threat of state and interpersonal violence. This Story+ project will use multi-media narrative to tell the story of the Little River assault and Our Day Out protest, in all its complexities, placing it in the context of LGBTQ+ organizing that had occurred in Durham since the early 1970s; investigating how this event shaped the Durham activists who responded and the lives of the individuals involved; and considering what the Our Day Out protests have to teach us now about organized resistance to hate-driven violence. Given the place-based nature of this investigation and the wealth of archival material available in Durham, this is a fully in-person Story+ project.

Through archival research at the North Carolina Collection at the Durham County Library, the LGBTQ+ Collection at Rubenstein Library, and the Southern Oral History Collection at UNC-Chapel Hill, as well as new oral histories, this project will interrogate how the story was told at the time; what was erased then and remains silenced now; what aspects of the story have been concealed over time and are ready to be reclaimed, including the discourse of reconciliation and restorative justice that some of the organizers advocated; and what modes of leadership were at work in the Our Day Out protest. This narrative historical inquiry employs methodologies of public humanities research to bring forward a story of resistance, mutual care, solidarity, and collective visioning for new forms of justice.

Key Topics we will explore together include:

Student Skills Students on this Story+ team should have skills in, or an interest in learning about: 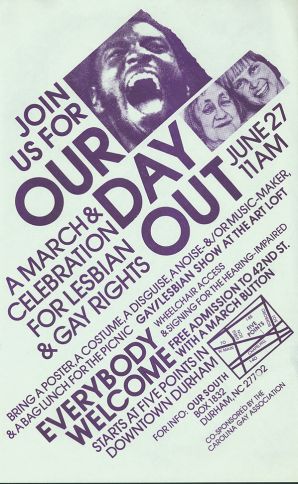