The Seat of Fascism: Narratives of Repression and Resistance in North Carolina

Story+ 2021 | The Seat of Fascism: Narratives of Repression and Resistance in North Carolina

In the 1970s, the National Alliance Against Racist and Political Repression (NAARPR) selected North Carolina to be the focus of its inaugural campaign. On July 4, 1974, an estimated 10,000 people from over twenty-five states traveled to Raleigh to participate in a protest organized by the NAARPR and sponsored by the Southern Christian Leadership Conference. From the steps of the Capitol building, keynote speaker Angela Davis suggested “racism and political repression is more severe in North Carolina than in any other state in this country.” ‘The Seat of Fascism’: Narratives of Repression and Resistance in North Carolina, offers students the opportunity to examine this unique and important moment in history. What can the constellation of social movement campaigns from 1970s North Carolina tell us about the role of the carceral state in stifling democracy and suppressing meaningful social change? Students that join our Story+ team will investigate whether and how the state uses incarceration as a tool of repression in the post-Civil Rights era by collecting, analyzing, and interpreting archival materials focusing on the NAARPR, including documents from the Duke student chapter of the organization, as well as the North Carolina Political Prisoners Committee. With the materials they collect from Rubenstein’s archival collections - such as protest ephemera, meeting notes, legal documents, legislative records, images, zine articles, and personal correspondence - students will excavate the past in an effort to contextualize the present, inviting audiences to consider how these histories might align with or inform contemporary movements in Durham and across North Carolina that are fighting against political repression, mass incarceration, and police violence. By the end of the six week term, student researchers will create a digital database focusing on collection items that will help us tell the story of political repression and resistance in North Carolina.

The Seat of Fascism team spent our six weeks together exploring digitized archives from local and national repositories for sources that illustrated both the tactics of repression the North Carolina state government used against Black Liberation movements and BIPOC individuals in the 1970s, and the modes of resistance these communities cultivated to dream their own futures. Though North Carolina at this time sought to project itself as a bastion of post-racial New South stability to the rest of the nation and the world, the reality on the ground looked much more like a laboratory for repression, where strategies to continue inequality and violence that are still recognizable in the U.S. today were tested and developed. As a response, the NAARPR deemed coordinated resistance efforts in the state with the idea that if state repression could be stopped in North Carolina, it might be stopped anywhere. Our project sits in this moment of contradiction. During our meetings as a group, we read and discussed a variety of sources that illuminate this history in North Carolina and the U.S., learning extensively about political prisoners, prison abolition movements, COINTELPRO, labor movements, and police violence throughout North Carolina. In particular we came to conclude that the most important thread our story must tell is that there is no story of repression without stories of resistance. Alongside this work, our team studied the potentials of and powers of digital exhibit cultivation while building an Omeka site.

This digital exhibit [Link coming soon!] is the culmination of our work, containing the larger narratives we explored and the three stories within it that each student researcher felt passionately about telling: Incarceration as a Tool of Repression, The Black Panther Party of Winston-Salem, and Political Prisoners and Self Defense Campaigns. Students collected photographs, news clippings, pamphlets, letters, sketches, and community news bulletins that allowed them to weave together these twinned stories of repression and resistance both across North Carolina and locally in Duke’s own history. 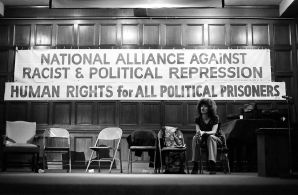