What This Land Has Seen: The Past and Future of the Duke Campus Farm

Story+ 2021 | What This Land Has Seen: The Past and Future of the Duke Campus Farm

More than ten years ago, Duke undergraduate students founded the Duke Campus Farm (DCF) in a rural area seven miles from main campus, in the Duke Forest. Their primary aim was to provide themselves and others with direct experience of the joys and hard work of growing real food. Over the last decade, the farm has evolved from a student-led interest group into a more fully-fledged university program with a broader mission: to catalyze positive change in the food system. As we imagine a (mostly likely virtual) celebration of the ten-year anniversary of our program, we want to mark the evolution of DCF and its impact on students, and offer appreciation to all those in the Duke and Durham communities whose brains and brawn built our current operation. In telling the story of the farm, we also want to honor the endurance of the land itself and the suffering of enslavement and displacement it and its communities have witnessed - like much of the South, the land that is now DCF also has a darker history of plantation enslavement, indigenous extermination, and extractive agriculture.

While the form of the final product will be determined by the group, we hope that what comes out of this summer will offer one way to address a question that we’re grappling with as people living in the United States - can we tell these stories as part of a cohesive whole and if so, how? How can we celebrate what has been achieved and acknowledge what has been sacrificed for this achievement, in order to work collectively toward repair? Drawing on the presences and absences in the farm’s existing archive, we hope to tell the story of the past and future of the Duke Campus Farm, both as a vibrant space of learning and ecological repair, and as a site of mourning, enslavement, extraction and displacement.

“What This Land Has Seen” brought our team together around a central question: how can we tell the multiple histories of the Duke Campus Farm? The researchers brought their diverse experience with food studies, cultural anthropology, documentary studies, environmental science, science communication, agriculture, and community care to their exploration of DCF’s archive. They crafted research questions probing three central aspects of the land’s history: first, its original Indigenous occupants, the Couch family whose plantation displaced them, the African Americans whom the Couches enslaved to work the land, and its nonhuman cohabitants; second, DCF’s heritage garden, the Cackalacky Plot, and its usage to discuss land history through plants like okra, cowpeas, colored cotton, corn, squash, and tobacco; finally, the decade of student projects and student-facing programs which continue to engage Duke undergraduates through interdisciplinary experiential learning and embodied knowledge of the food system.

Our team produced a Miro board to share their research. They chose this format because it allowed them to show the connections between their three categories of inquiry. Through five themes, they were able to demonstrate the circular, intertwined nature of the land’s multiple histories, its present work, and its future aspirations. These themes were: community, interpretation and representation; memorializing and erasure; nonhuman subjects; and embodied knowledge. They linked them under the overarching concept of biocultural restoration.

They wrote a land acknowledge for DCF to acknowledge the Indigenous nations who stewarded the land prior to colonization, introduce audiences to the local Occaneechi Band of the Saponi Nation, and highlight at least thirty-six enslaved people whose lives on the Couch plantation were erased from historical memory.

Finally, they pointed to potential next steps based on their research findings this summer, including: more hands-on programming; a centralized location for student projects; and relationship-building with community history holders, the Occaneechi Saponi, and migrant farmworkers.

To learn more about DCF and associated organizations/communities: 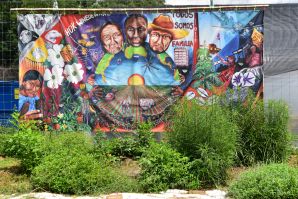